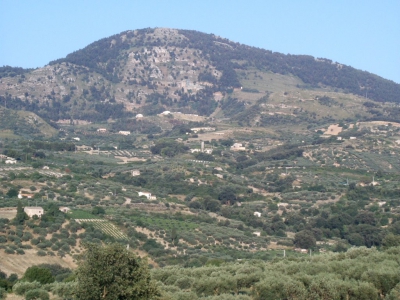 It is located within an area heavily populated in ancient times by virtue of its particular
morphological characteristics, orographic and hydrographic. Numerous settlements, which arose during the First Iron Age, in fact occupy the isolated peaks in a position of control of the areas of the valley. Mount Triona has irregularly shaped triangulars and the maximum altitude reaches 1,213 meters, the summit consists of two peaks, Pizzo Croce to the east and Pizzo Telefono to the west.

The relief is characterized by an extremely steep northern slope with numerous rock faces, while the western and southern slopes alternate short terraces more or less steep, rather extended that attenuate gently up to an altitude of 800 meters.

The native vegetation of the mountain is a low and bushy scrubland largely replaced or supplemented by trees that cover conifers and along the way you can admire orchids and other interesting endemic plants.

• Stop for a picnic lunch at the picnic area in Piano Cervi.

• In the afternoon: visit the Sanctuary of the “Madonna del Balzo”. The Sanctuary, built between 1664 and 1679, is set on a cliff of Mount Triona, beneath which develops Bisacquino. From the exterior open space in front of the church there is a magnificent view stretching from the ruins of the Arab castle "Battellaro" and "Calatamauro", the Swabian castle of Giuliana, the monastery of Santa Maria del Bosco all the way to the Belice Valley and the mountains overlooking Palermo and Trapani.

Distance: 8 km (to the summit)

Difficulty: medium-high. The tour is not suitable for children.

Make sure you enter all the required information, indicated by an asterisk (*). HTML code is not allowed.

If you not change browser settings, you agree to it. Learn more

CONTACT US FOR RESERVATIONSWe are at your disposal for bookings and inquiries.

Every day for lunch and dinner.
Tuesday's closed.

How to reachIl Noce Antico Restaurant pizzeria and b&b

Come to visit us!!